I have to share this story with you, because it makes me laugh.   I know you will totally appreciate this “Kathy” story :). It’s a long one, but you need all the details.

Last month, just before returning to work, I made a quick trip to Sayulita, MX.   A little beach town, that I had visited several times over the last so many years.    There is a special vibe there.  I like it.

Catherine – my longest friend of 42 years – decided to join me for the first 3 of 7 nights.   We had a great couple of days, except that on the third day, we both got food poisoning.  Yuck.

That night, we were head in the toilette sick.   The only difference was that she was “sick” for only 30 minutes but mine lasted 5 hours.  I don’t think I have ever been so sick.   All I kept thinking was, “Dammit, I have taken such good care of myself the first few months omg what have I done !!!”   The next day Cath leaves and I  have the next 4 nights on my own.

It was the next morning when it all happened.   I “lost” 2 hours.

I did not realize that when I got home very early that morning – I must have hit a button on my phone- as a couple of weird things happened.    But the time on my phone reset to  local BC time.  So for the next 2 days, I was two hours behind with everything.

I always wake early but that morning when I looked at the clock, it said 5am.    I thought, “Ugh, it’s only 5am ?  I so need to get more sleep.”    At 7am I ventured out, to get something to eat.   Early afternoonish I went down to Los Muertos, a quieter beach where I really enjoyed just hanging out for the day with my book and new Mexican blanket that I purchased 🙂

I go to the beach, swim, read my book, relax…wander back to my guest house, shower and relax for a bit.  At 5pm I wander down the this little bar that I know has happy hour.  At 5:15pm I texted him.  Because that is what I am.  Punctual.     He instantly says,”I am on my way.”   Of course he is.  It is 7:15pm.  Oh and I couldn’t figure out why there was no happy hour as I knew this place had it between 4 and 6pm.  BUT I didn’t care because I could hardly get that one drink in me.

The next morning, I woke up and thought, “5am again…why am I waking up so early !!!”  Later that morning,  as I was leaving the building to go down to the beach and enjoy my last morning,  I saw the two sweet room attendant ladies I had all week.    I pointed to the check out sign on the wall, letting them know that I would be in the room till noon as my flight was not till 5:15pm.     They did not speak English, so they just nodded their head, always smiling.

I retuned to my room at 10:15am (12:15pm omg) I showered, finished packing, hung up my “travel clothes” and got into some comfy clothes, so I could just lie down for an hour and rest before I had to leave.    Too be honest, I was ready to go home.  I was done.  That food poisoning really kicked me in the ass.

As I was resting, the two housekeeping ladies knocked on my door.  When I opened the door, they were standing there with all their cleaning supplies.  “Oh, OK I said, come on in.”    They started cleaning around me, moving my packed suitcase to the other end of the room….I even jumped up and helped them move it….the whole time I am thinking this is so weird, they must be anxious to get their day done.   Meanwhile I am looking like a Princess, stretched out in my bed with them cleaning around me.     I just kept thinking, so weird lol.   When they left they returned with some young “manager” who did not speak any English except for, “Check out not tonight.”  And I kept saying,”I know, check out in 45 minutes.”

I went back in my room, got dressed and when I walked out into the hallway, all ready to go, the 3 of them were standing there and I said,”Ta Da!  And I am off.”   Yes I did.   I actually said that.  “Ta Da!”  I think at this stage they thought I was cray cray.

Considering I had 5 hours to kill (not really) I decided to take a local bus to the airport.   I was told it would take just over an hour.  As I walked on the bus, it was all locals.   There was a man at the very back of the bus, who was gesturing me to come sit near him.   He and I started chatting.  He was very charming.  It turns out his name is Roberto.  He is 77 years old and lives very modestly in Bucerias.  He was living in Sayulita but what happens is when it’s peak season they kick them all out and rent it for more $$$.   He is an artist, was married to an American lady, has 5 “kids” – all who have left MX, two of which are doctors, one is a dentist and another is a lawyer.  He told me how he never finished school.  How he has always loved to read.  Even when he was 5 years old, he found a bible and he read it cover to cover.  His creativity and inspiration relating to his art work would often come to him in his dreams.   He mentioned that many of his art pieces were at a local gallery in Bucerias.

As we approached his stop he said how he wanted to continue on, so he could buy me a coffee at the airport pre my flight.   I said, “Oh I would love that as I have so much time to spare before my flight!!!!”  But instead, we made a quick decision for me to get off and wander down to the gallery, as I wanted to see his art work.

We walked down to the gallery, chatting about his life in Mexico, his grandkids, his health.   In the gallery, I saw all of his paintings.  They are all so unique and beautiful.  He shared the history and personal story of so many.  We spent at least an hour or so together, walked back up to the OXXO, I collected my bag and as Roberto ensured I got on the right bus, we said our goodbyes.  Such a spontaneous and wonderful adventure.

I arrived at the West Jet terminal to check in – I thought, oh how odd there is no one checking in but me – I walked right up to the counter, as he handed me my boarding pass it said, “Boarding at 4:30pm”.  Perfect, I thought.  It’s only 2:10pm, I have a couple of hours to try to get some food into me.  So I got through security, found a restaurant, settled in, ordered a chicken sandwich (that I still had a hard time eating) and a bottle of water.

Despite the fact that I just wanted to sooooo crawl into my own bed, my only concern was getting home pre noon the following day,  as Jenna had her dance recital that afternoon.  I did not want to miss it.

I managed to get on a flight at 8:40pm that evening, however I had to spend the entire night in the Calgary airport as the flight to Nanaimo did not leave till 10:15am.   Yes I was that person in the airport at 2am, with two chairs pulled together, wearing flip flops – it was -20 and snow outside – and all wrapped up in my Mexican blanket.  It was a long morning.

As I boarded the plane, there was an older gentleman sitting on his own.   I approached my seat and said,”Good morning, I will be your neighbour for this flight.”  We talked the entire flight.  He was a kind human.   We were such good company for each other.   I learned more about myself from that experience.

By 11:30am Sunday morning, I was back on the Island.  I picked up Jenna and was able to see her dance recital.     I got back into my usual routine with food / juicing / taking care of myself and within a few days, I felt amazing .

Of course it was disappointing to miss my flight, but those “lost two hours” created so many wonderful memories.  I don’t think I would change anything 😉

I love you sis,

You can imagine how terrible I felt about the entire situation back in the hotel room.  Those poor housekeeping girls thinking I was so rude !!!   I felt so bad, I found myself writing this note to the hotel staff where I stayed.

My name is Kathryn Samuel and I checked out yesterday, on Saturday March 2nd.  Everything went very well however I am needing for you to please apologize to my room attendants and the gentleman who works for Casa Pia.
They were trying to communicate to me that check out was 12pm – which I knew – but I was not understanding what the confusion was.  But I now know,  the time on my phone was two hours delayed.   An error had occurred, that I was not aware of.   So I thought it was only 10am BUT it was really noon so they were confused as to why I was still there.  I left at 2pm but I was thinking it was noon.  This is the truth as I also missed my flight :(.
Please let them know that this is why we had such confusion when it was relating to check out time.  I did not intentionally stay past noon.
Thank you so much, I had a wonderful stay.
I never did hear anything back lol and that’s OK.  I just had to at least try to apologize.
I also never thought I would hear from Roberto again.  He did ask for my name, but not once did I mention my e-mail address or that I was on Facebook.  Well a few days after I got home, there was a personal note on my facebook page.  I was very touched.
I believe in miracles.  You are a miracle.  To get to meet you in the strangest manner that is like if an angel coming from the most beautiful part of the heavenly sky.  I saw you exactly in the moment you hot into de bus, and I told my friend, look at that beautiful lady.  There were sits all over but you had a big luggage and came direct to me in the back of the bus.  Wow, I just could not believe it.  And then to get off the bus to go to the Valeria that was very bold of you.  Such a fine lady walking to the Valeria without your bag we left in Oxxo with friends, you have an incredibleadventurous spirit which I just loved.   I adore to be in touch with you my beloved angel.  Roberto Xurawe Almeida.
Picture of Roberto, his Art work and the gallery. 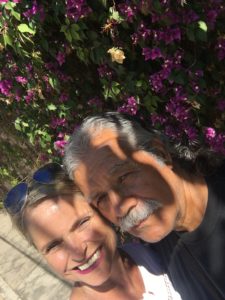 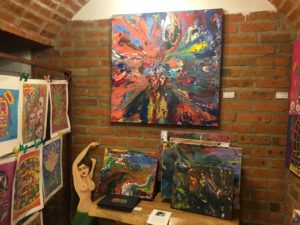 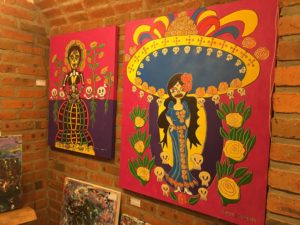 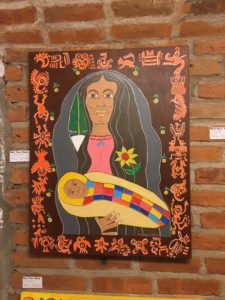 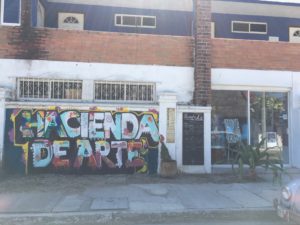 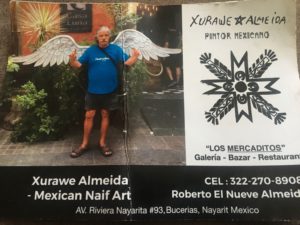 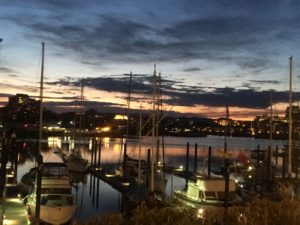